From PaperDemon Creative Wiki
Jump to navigation Jump to search

Battles are a fun way to pit your characters against a wild variety of denizens of the Paperverse while gaining gold and loot.

Battles are a collaborative effort of the community to work together to fight against a common enemy, a boss. Battles are conducted through a special form in the forums and are processed by a bot to calculate your attack damage and the boss's counter attack damage. Each attack requires that you draw a work of art following the given prompts.

Gold is always a reward for participating. Your gold reward will be based on how much you participate in the battle--the more attacks you make, the more gold you'll receive! If you land the finishing blow, you get an extra gold drop.

There may also be additional rewards such as items. Check the battle thread for details.

You don't need to take any extra action to redeem gold and item rewards. Just follow the normal instructions for the battle. Rewards will be processed by an admin separately through the normal submission queue process. You don't have to submit your art to the queue because the BattleMasterBot will automatically submit it to the queue for you.

If your submission is a duocast and both characters are present in the art or writing, BOTH characters get to redeem the AP. Both characters AP will be added during the same request. However, only the main character doing the attack will receive any item rewards. 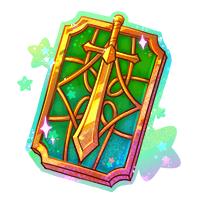 You'll need to purchase a battle token from the Item Shop and equip it to your character before they can participate in the fight.

Battles are a special event that occur roughly every three months and last over the period of 2-3 weeks. Keep an eye on the News section for announcements of battles or join the mailing list to get notified when new battles start.

If you run low on HP, you can use a healing item to replenish HP.

Different elements will be strong or weak against other elements. Keep an eye out for the elemental alignment of your enemy-- it will affect how effective your attacks are in battle!

Check out the Elements chart for information on what duocast combinations create which secondary elements.

We've had requests to allow players to pit their characters against other characters. We aren't able to support this yet but we will consider it in the future.