From PaperDemon Creative Wiki
Jump to navigation Jump to search

Elements are a core mechanic to battles in the game and are separated into two tiers.

Every character has one of these four elements as their latent element. Players must complete the Latent Element challenge for their character to get their element.

Each character will have one of these four elements.

With the Latent Element challenge completed, your character has one elemental attack based on this element. As you progress through the game, your attack spell will gain more power and status effects.

Characters can combine their element with another player's characters to create a tier 2 element. This is done through duocast.

We have yet to reveal the final list of tier 2 elementals. Stay tuned! 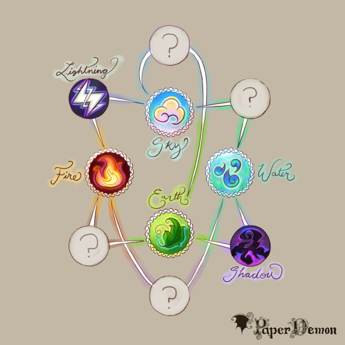